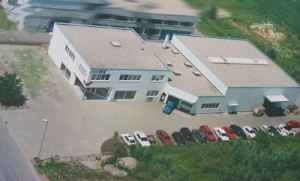 EBSO GmbH, located in Hagenbach near Karlsruhe Germany, was incorporated in 1981 as a manufacturer of standard lead-forming equipment and special machines for lead forming.

The founder (Mr. EBerhard SOmmer) is an engineer who used to work in a company who manufactured also lead forming machines. He decided that he could make that kind of equipment simpler, better and on the most important point more flexible.
Offering cost effective solutions for low to high volume assemblers and invoking practical ‘hands-on’ advice to every sale became an early theme stressed in the way EBSO did business.
From the early days till the present there was no special enquiry, no matter how complicated it was, EBSO did not try to find a tooling solution for. Even today, thru-hole lead-forming equipment is still a significant portion of the business.

In 1997 EBSO moved into a plant of more then 2000 m² production space.With the most modern milling and drilling machines and highly skilled employees EBSO became the most recognized manufacturer of lead forming machines in the world.With over 30 well trained sales partners world wide, EBSO can provide best service in pre- and after sales for our products.

1999 EBSO decided to expand its horizons and apply its expertise into the field of SelectiveSoldering.The SPA 2000 + was the first Selective soldering machine EBSO introduced to the market.Redesigned in 2003 EBSO offered then the SPA 250/400 series which should open the door forelectronic manufacturers investing in miniwave soldering machines at competitive prices.

2005 EBSO introduced 3 new products in the selective soldering field. The SPA-R, SPA 200 and the SPA-Modular. Since then and so far EBSO is the only manufacturer in the world providing a complete range from manual to fully Inline automatic Selective Soldering machines.

In November 2006 the first fully automated Inline SPA-Modular was installed at Schefenacker Australia.

EBSO doesn’t just sell machines; they specialize in educating customers on processes, materials, equipment and implementation. Customers often decide to utilize EBSO equipment because EBSO provides them with a total solution and helps make the entire process painless. They are often in need of a quick education on certain applications and good advice on how to get the job done. On the other hand EBSO understood to listen to customer’s demands and problems to make a good running system even better in the future. Our highest goal is to make our customers purchase truly turnkey.

2009-2010
During the time of the World Wide economical and financial crises we took the time and the chance to develop the new SPA NC series.